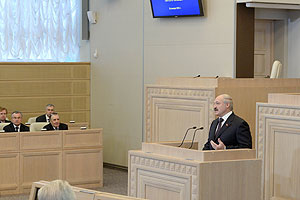 Belarus President Alexander Lukashenko said Thursday that trade wars must be prohibited under the charter of the Eurasian Economic Union (EEU).

Lukashenko cited recent milk, meat and candy wars between Russia and Belarus as examples of what should not be tolerated under the new organization.

Lukashenko also said the EEU was founded on purely economic terms and that he is not opposed to Belarus leaving the union if it were to become a political lever, a Silk Road Reporters story said.