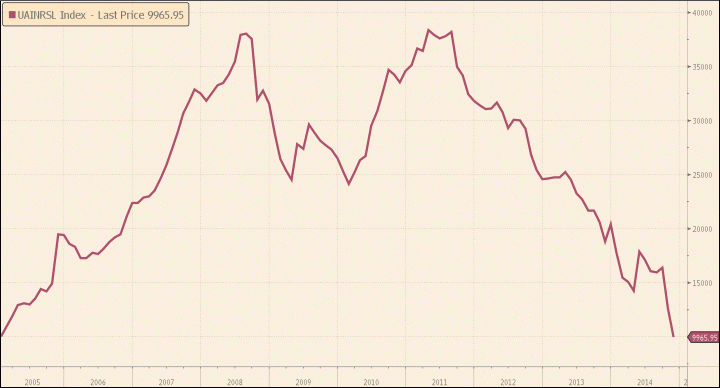 Ukraine's central bank has released its reserve numbers, revealing that it has fallen below $10 billion, the Financial Times said on Saturday.

It is the first time reserves have fallen below $10 billion in nine years.

The country has entered a $17 billion agreement from the International Monetary Fund, but recent conflict and Russia's annexation of Crimea has put the program in danger. Other sources of international funding are needed in order to make sure debts held by the country are serviced and it can conduct import and export business.

The National Bank of Ukraine said it had $9.9 billion in its reserve, down sharply from the $40 billion it held in 2011. Reasons the bank gave for this drop in reserve funds include unpaid invoices to Russian gas producers, servicing debts to foreign creditors and funding to help its struggling currency.

There are concerns that the country will likely default on its debt obligations unless some form of international intervention is performed, the Financial Times said.