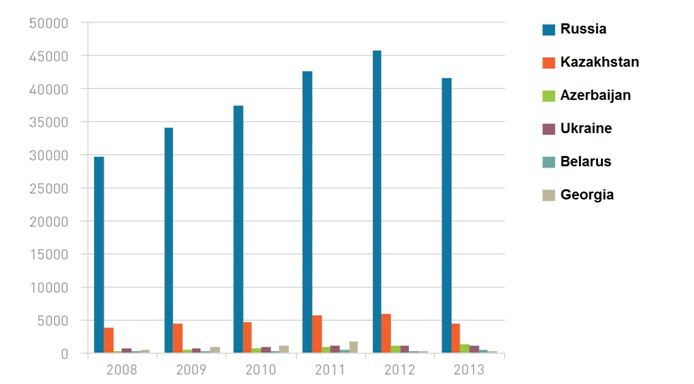 For the first time in several years the Commonwealth of Independent States' (CIS) mutual foreign direct investment (FDI) fell by 10 percent, according to a report released on Tuesday.

According to the report by the Eurasian Development Bank (EDB), Russia accounted for the majority of FDI figures with 85 percent of accumulated FDI among the CIS and Georgia — equaling roughly $41.63 billion — and Kazakhstan with nine percent, or $4.37 billion. FDI in Ukraine fell 11 percentage points.

Reasons given for this apparent downturn include the growth in completed investment projects and decreased Russian FDI in Kazakhstan's metallurgy due to the sale of Voskhod Chrome.

Recipients of FDI accumulated in this region break down to Ukraine receiving more than 30 percent, Kazakhstan with 19 percent, Belarus with 16 percent and Russia receiving nine percent. Russian investors largely provide the structure of FDI in the region. Russia's largest oil and gas companies, Gazprom and Lukoil, make up 14 percent of FDI CIS-wide.